Nasira, the CEO and founder of a fast-growing mobility startup from Amsterdam, was over the moon when her company raised its first venture round. Finally they’d have the cash to build out their product and hire a team that could expand into new markets. But despite the stamp of approval from world-class investors, Nasira was struggling to lure top technical and leadership talent. Established corporates and big tech companies always seemed to outflank her on salaries and benefits.

Nasira soon realised, though, that she had something up her sleeve. The prospect that her company would eventually be acquired or go public at an impressive valuation – as an increasing number of European startups had done – meant equity in her business was a drawcard. It took some time for Nasira to get used to the idea of giving away even more of what she’d built from scratch: after all, she’d already given a big slice to investors. But when she saw how appealing it made her company to candidates – not to mention the motivation for her team once they joined – she came around. By adding more stock options to remuneration packages, Nasira managed to lure a Chief Product Officer away from Uber, followed by an experienced Chief Operating Officer out of Amazon.

We’ve seen a version of Nasira’s story play out across Europe time and time again. In Silicon Valley, employee ownership has long been recognised as a vital implement in the entrepreneur’s toolkit. Not only do stock options draw more people to start-ups, which are a powerful engine of economic growth, productivity and job creation. After a successful exit, these companies also create ​‘graduates’ who frequently re-invest their wealth, seeding the ecosystem with fresh founders and angel investors to jump-start a flywheel of innovation and investment. In Europe, startups cumulatively employ 2 million people and have 100,000 open positions, according to Dealroom. When start-ups succeed, the economy as a whole does too, and stock options are a key ingredient in that success.

On this side of the Atlantic, however, people have generally been slower to recognise the profound impact of employee ownership. Typically the carve-out for employees in European and UK start-ups would flatline at 10%, with everyone’s existing shares being diluted with each new round of funding. Early joiners’ willingness to take the gamble on a young company might still be recognised with a larger option allocation, but they could expect less than half of what their US peers would receive for equivalent stages of funding and seniority. 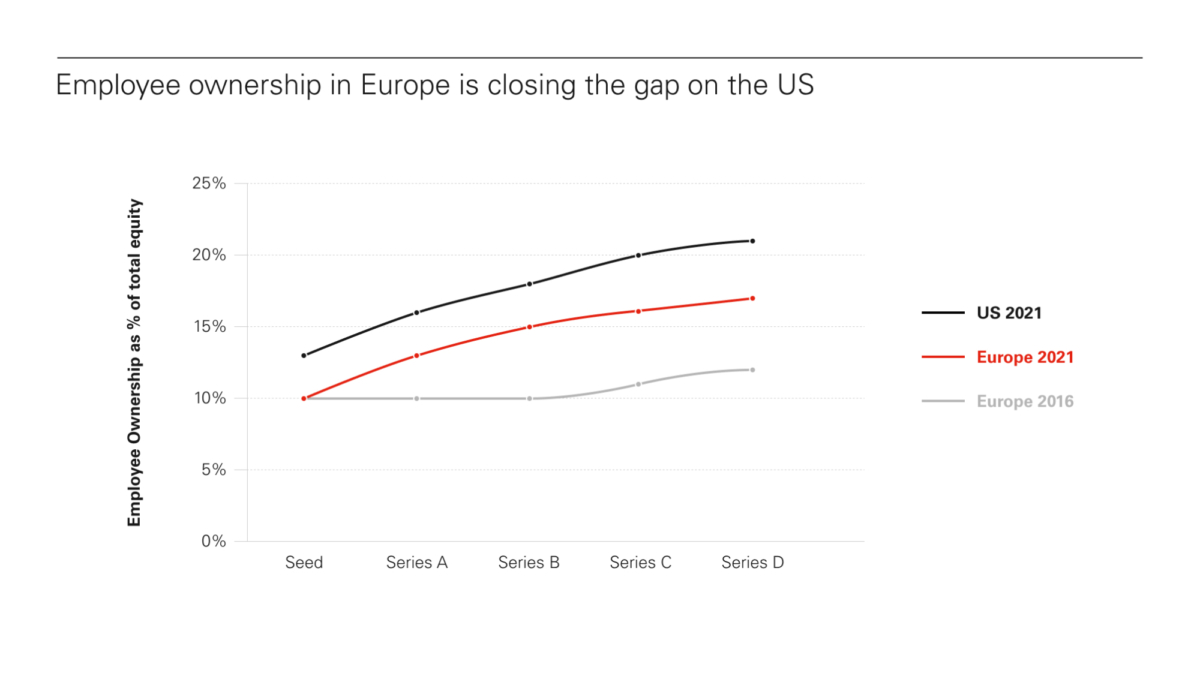 The good news is that all of this is changing. New research conducted by Index Ventures shows that, over the past five years, the UK and Europe have been closing the gap with the US. No longer is the share of employee ownership maxing out at 10%. Instead, it’s nearing the 20% mark as companies approach IPO-readiness, within striking distance of the US at around 25%. The biggest increases in stock option grants have been in more technical roles, and for experienced leaders across all functions. But in line with the recent explosion of European startup salaries, the overall trend is upwards across all jobs and countries.

What’s behind this dramatic change? Funding used to be the major bottleneck to company growth in Europe. But as investors have understood the opportunity in recent years, capital has flowed more freely. Today instead, it’s the best talent – the developers, the salespeople, the communication strategists – that are the hardest to come by, and the most fiercely fought for. Hence they can command more power in the market, and rightly expect a bigger portion of the financial upside from the companies they’re helping to build. Instead of relying on a salary, workers see their labour as an investment in the company, and are demanding that it be rewarded. They’re asking for, and getting access to, the greater returns available on capital.

Wider sociocultural trends are also supporting the growth of stock options in Europe. With many more high profile IPOs under our belt, joining a start-up is no longer seen as a crazy idea – it’s a recognised and often savvy career move. Just as people have become more excited and willing to risk joining relatively untested companies, founders’ and investors’ mindsets have shifted too. ​‘Unicorn’ (billion-dollar plus) valuations used to be a rare aspiration in Europe, but now the continent boasts over 300.

Having an exceptionally talented and motivated team is widely recognised as the surest way to unlocking not just unicorn, but decacorn, and higher, valuations. For example, Revolut (UK) is now reported to be valued at $33 billion. Sharing some additional percentage points of equity is a small price to pay in pursuit of such riches. Government and tax policy across Europe, while still fragmented, is also slowly adapting to encourage the use of employee ownership, thanks in part to campaigns such as Not Optional. Six European nations now have more startup-friendly stock options policies than the US itself.

But there’s still a way to go. European option pools are still smaller on average than in the US by around 3%, and the actual value of these grants is also reduced by the lower average valuations of European startups. We must maintain momentum.

If you’re a founder, it’s important to keep upsizing your option pool as your company grows and you raise money – especially in deep tech, where talent is especially competitive. (Index Ventures’ OptionPlan tool is the easiest way to design your stock option plan and individual grants, relying on the most up-to-date benchmark data.) Awarding options to every one of your first 200 employees (if not more) fosters a culture of inclusion and alignment that is critical to a startup’s success.

If you’re a policymaker, reforms are still sorely needed across Europe to make it easier for startups to deploy equity to make themselves more attractive for employees. Many countries still treat stock options as income, when it would be much fairer to classify them as capital gains, given that they remain illiquid for many years and frequently end up worth nothing. And tax would best be levied at the point shares are actually sold, not when the options are exercised or granted. After all, at that point, the recipient may not see any upside for years to come. The Startup Nations Standard, launched by the European Commission in March, is a great starting point for convincing more national governments to make changes such as these a priority. Following positive reforms in Latvia, Lithuania, and France, several other European governments, including the UK, are actively exploring changes.

A fresh approach to employee ownership is crucial if we want founders like Nasira to be able to create European tech giants on the scale of Google or Amazon. Until then, too much of Europe’s top talent will simply flow into the European arms of US firms, relocate overseas, or stick to lower-risk corporate jobs. We can’t afford to wait. It’s time for workers, founders and investors of the world to unite, embracing employee ownership to help build a brighter future.